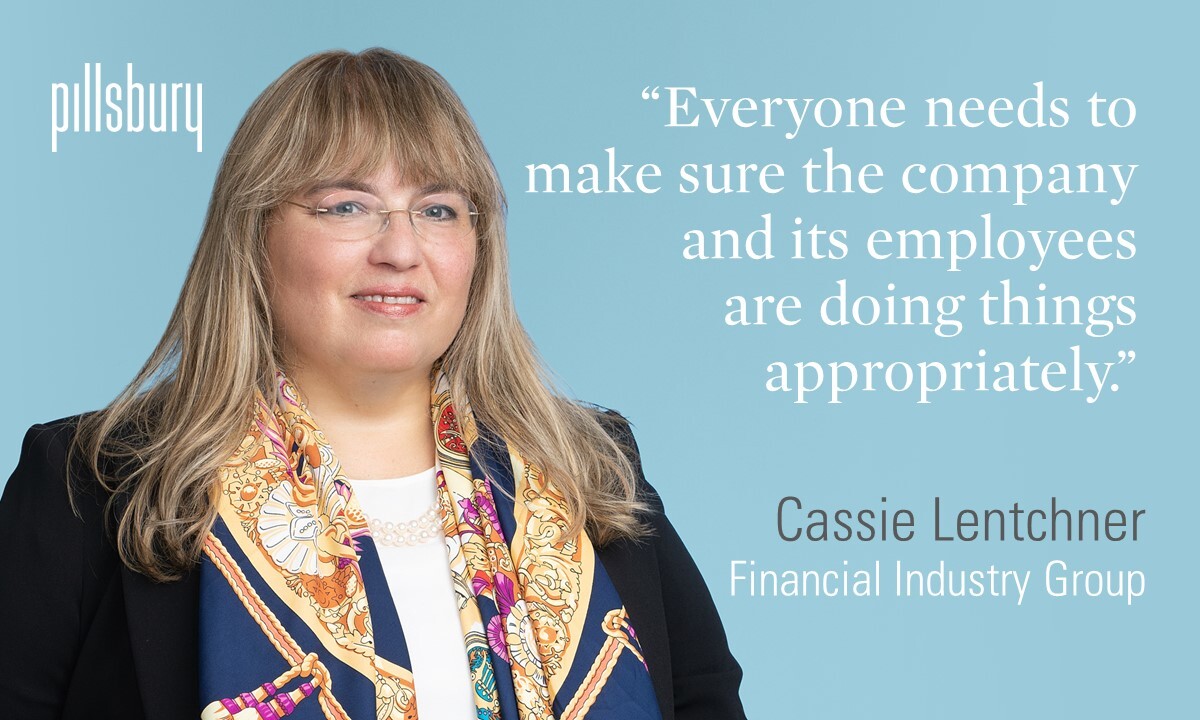 08.25.20
Episode #15: Political Law, the Pandemic and the Coming Election Season

Political Law, the Pandemic and the Coming Election Season
Hi, and welcome to Pillsbury’s Industry Insights podcast, where we discuss current legal and practical issues in finance and related sectors. I’m Joel Simon, a finance partner at the international law firm Pillsbury Winthrop Shaw Pittman. To our listeners, from wherever you’re tuning in, welcome and thank you for your continuing interest. Today, I’m pleased to introduce Cassandra Lentchner, a senior counsel in Pillsbury’s financial services practice group. Cassie joined Pillsbury from New York State’s Department of Financial Services, where she served as head of compliance for the state’s regulator of banks and insurance companies following her prior experience working in Morgan Stanley’s legal and compliance department. Cassie has extensive experience developing, implementing and monitoring programs that help clients comply with myriad regulatory requirements, including programs for cybersecurity, anti-corruption, government and political activities, ethics and global financial crimes.

Joel Simon: Cassie, given your work experience, there are probably 50 different things I’d like to ask you about, but today we’re going to discuss political law and specifically presidential election year issues, with a focus on financial institutions, investment advisors and government contractors. We’re talking monetary contributions, pay-to-play laws, contact with government officials and entertainment—although I guess there’s a little pandemic going on that might interfere with that a bit. Where do you want to start?

Cassie Lentchner: This is a very important and timely topic. We’re in the final stages of the presidential election season. This is a very busy time in the political world. Companies and their employees are becoming more politically active because it’s a very active time politically. The pandemic is increasing the types of issues that companies are facing with government. Companies are interacting with their attempt to influence government in areas that they haven’t done so before. For example, lately, I’ve seen companies that don’t usually lobby and haven’t been lobbyists before advocate for their industry on pandemic-related issues, including funding and reopening. These are important issues, and in addition, companies that haven’t previously been government contractors are now offering to supply the government with PPE testing and other pandemic-related services. It’s also important to understand that this is a highly regulated field. There are many laws with respect to interacting with government officials and entities. These laws [focus on] two areas—giving of something of value to a government official and trying to influence a government official for official action.

With respect to giving, there are rules with respect to political contributions and gift giving that could be triggered anytime someone gives anything of value to a government official or their political campaign. Anything that could be given personally to the government official is considered a gift and has limits. There are different limits under federal, state and local law, and anything that has value that is given to a political campaign is considered a political contribution. “Anything of value” is a very broad term, and obviously includes writing a check, giving your credit card or cash to someone, but it also includes any kind of contributions where giving something that is worth something—anything of value, including lending out your office space, lending a conference room for a meeting, donating used equipment, or treating a person to a lunch or other entertainment. Giving something of value has limits and can trigger reporting and penalties. There are also rules—generally lobbying laws—that impact trying to influence a government official. Any kind of influence of legislative or executive action can be captioned under state or local lobbying laws, or federal, if it’s federal officials. These laws can even be triggered when somebody is trying to get a contract or influence a government official for business. Companies should have compliance programs to address these issues.

Simon: It sounds like this is a pretty high-stakes game, especially for financial institutions and investment advisors and others who regularly interact with the government. Can you elaborate on what they have to lose if they run afoul of these regulations and maybe touch on business and reputation risks, as well as civil and criminal penalties?

Lentchner: There are a lot of possible penalties in this area. There are different laws at the federal, state, and local level that running afoul can result in both civil and criminal penalties, as well as possibly bans on business. Making the wrong political contribution can ban a company from doing business with a government body for two years. It can also lead to a lot of unwanted public scrutiny. Political contributions and lobbying activity are promptly reported and followed by the media, especially in the run-up to an election. Efforts to influence the political process, either monetarily or through relationships, can become the subject of media scrutiny, as well as investigations. I spent a year of my life working as a congressional investigator looking into efforts to influence an election. Penalties in this area can be both civil and criminal. We recently saw one of the first criminal prosecutions under the Lobbying Disclosure Act for a person who was lobbying federal officials without registering. As I already noted, making the wrong political contribution can also cause a ban on business and be a crime if it is named by an impermissible contributor or reimbursed by corporation. Compliance systems are pretty clear on this kind of activity and can ensure that it’s done in compliance with laws. In the financial services space, this is particularly important because there are additional laws in addition to federal and state—political contribution limits and lobbying laws that are administered by securities regulators and these will require pre-clearance policies and procedures as far as tracking employee behavior. Investment advisors, swap dealers and many bond dealers have special rules that apply to them and completely prohibit some contributions, limit others and require you to understand what your employees are doing and make sure they are limited to not run afoul.

Lentchner: Exactly. In the current political environment, efforts to influence government policy or elections are being very carefully scrutinized. Media outlets are covering the election and political giving. Government contracts are also public with public bidding processes and open record laws. There’s a lot of ammunition for investigators and competitors, and others, to make allegations about proper behavior. These things are heating up companies and their employees are active in selection. Everyone needs to understand the laws that apply to them and set internal policies and procedures in place to make sure that the company and the employees are doing things appropriately. Generally that means pre-clearing your activity. It’s important to do this carefully and not over-restrict employees without a legal restriction because they do have a First Amendment right to make political contributions. Citizens have the right to petition the government. So, it’s critical to make sure that the policies are carefully drafted to allow proper behavior but prevent improper behavior. Nuanced political compliance programs can help companies and their employees be active in the election and influence government officials properly and lawfully, reporting it where required and avoiding pitfalls for the unwary.

Simon: It sounds like there are clearly programs and policies that can be put in place to try to guide the employees and to guide the corporation, but then on the backend, I take it, you’re then dealing with investigations and damage control. Maybe you could speak a little bit about that, as well?

Lentchner: There are many different kinds of investigations and damage control. The municipal bond issues are often investigated by many different people. There has also been congressional investigations on political contributions. Attorney general investigations. These can be a very wide-ranging, and any kind of misstep is going to be picked up by the press and that often triggers investigations. The federal election commission, on a federal level, is a very active and investigatory body. They receive reports. They ask questions, and they regulate the candidates on the federal side. There’s also similar bodies at both state and local levels that regulate the campaign finance and the candidates that are accepting donations, and the CSS and FINRA have rules that apply to the firms that are doing business and they investigate and follow those rules. So, really, from congressional to attorney general, to regulatory investigations—there are many different types and they can and will come when there are certain publicly reported contributions or political activity that may not be in compliance with law.

Simon: It sounds like after listening to this podcast, our listeners should revisit our discussion with Amanda Halter, the co-leader of Pillsbury’s crisis management team, talks about the psychology of a crisis and how to position a company for the best possible outcome in the circumstances. These two episodes can help people connect the dots on how to deal with these types of issues. It’s been great having you on today, Cassie! Thanks for joining!

Lentchner: Thank you very much, Joel!