Elizabeth Vella Moeller once again joins host Joel Simon to discuss which industries are seeing the most Congressional scrutiny and how to craft the best response if your company becomes the subject of an investigation. 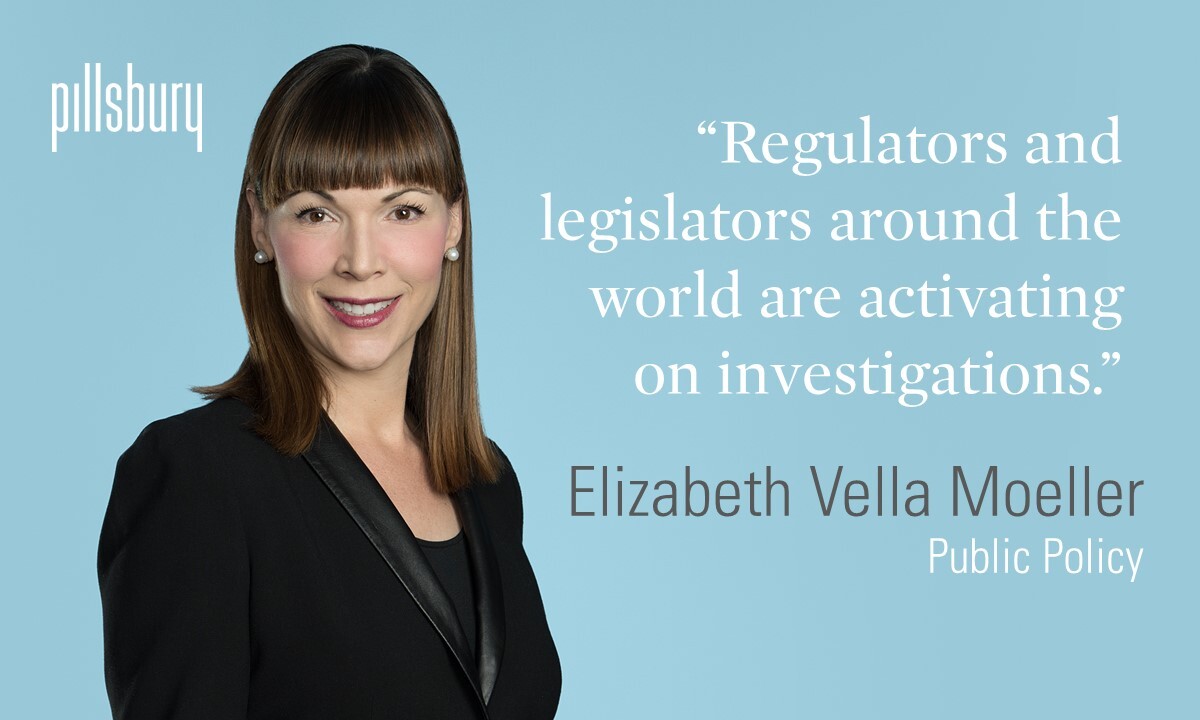 Congressional Oversight Activity in the Marketplace

Hi, and welcome to Pillsbury’s Industry Insights podcast where we discuss current legal and practical issues in finance and related sectors. I’m Joel Simon, a finance partner at the international law firm, Pillsbury Winthrop Shaw Pittman. Today I am joined by Elizabeth Vella Moeller, the leader of Pillsbury’s award-winning bipartisan public policy group. Based in Washington, DC, Elizabeth manages high-stakes client matters involving technology, energy and federal appropriations, among other issues. In the past year, Elizabeth played a key role in helping clients to obtain and utilize CARES Act and other stimulus-related funding. And now she is focused on the 1.9 trillion-dollar COVID-19 relief package and the proposed infrastructure plan. This is Elizabeth’s second visit to our podcast, and we are excited to have her back with us today.

Elizabeth Vella Moeller: I really appreciate the opportunity to be with you Joel. It’s always a pleasure to connect the dots between Washington and business. And now more than ever we are seeing that with the congressional oversight drive. That really is sort of the macro trend. When you can’t legislate, you can investigate. And we are excited about what we are seeing and how we can help clients in this space as that intensifies.

Joel Simon: When we last spoke back in June of 2020, the first round of PPP loans had been quickly exhausted. The mainstream-leaning program was just getting off the ground and you reminded everyone that when things were in full swing that there were also myriad government funding opportunities available for a wide range of projects and industries. Of course, today we are in a very different economic and political landscape and though government funding is dominating the public debate, this issue of congressional investigations is one that’s evolving in the background. What can you tell us about all of that? Maybe give us a little bit of congressional investigations 101?

Moeller: The landscape is always changing. What a year we’ve had. Not only are we here in Washington dealing post pandemic and remaking how you do business. But we are also post insurrection. And as a result, we’ve just got to be more active than ever, and that includes in defense for congressional investigations. Last year, it was a lot about fraud and abuse, and we had the privilege of working with a client that received a letter, one of the first five letters, from the new House Select Subcommittee on Coronavirus Crisis that is tasked with oversight. That’s a lot of people working very hard exercising oversight powers because they wanted to make sure there wasn’t fraud and abuse. It also happened to be over Mother’s Day weekend, and served as a reminder that congressional powers are incredibly broad. The demand was for a lot of documents and a lot of information in a short period of time. We worked with the client to understand what the facts were through an internal and privileged investigation. And Joel, you and I both enjoy the chance to give strategic advice, but when you get a letter demanding all of your correspondence and that you return all stimulus funds in two days, and have a response ready, you really do need to have your CEO, your CFO, your GC, right. Others I’m sure you could help us identify along the way, but, in the case study I’m telling you about over Mother’s Day weekend, it was all of the above. And it was really a good chance to tell our story after we understood all the facts, and then lay a political strategy to go along with that.

Simon: Perhaps you could describe for us the way a congressional investigation unfolds and give us an indication of which industries today are the likely targets. And what else might be emphasized by the new administration in this context?

Moeller: It is interesting, because though of course we are tracking on what the top priorities are in a congressional investigation, it’s really up to each individual committee chairman to determine the rules of the road. They have extremely broad powers. We often say, “Congress has the power to serve as the investigator, the judge and the jury.” Right? Because they’re making the rules. The typical rules of what we’re used to in our legal practice don’t apply. Those have been determined as part of a committee—the congressional authority is separate from what we determine in our own system of judicial civil privilege. So, knowing that, they have so much control. Right now, there are many target industries that are vulnerable and many investigators who were hired last year, ready to activate. Those include financial institutions, broadly, but any sort of consumer-related issue will be a hot topic. We’re also seeing a trend in any merger-related investigations. And mind you, any client or entity that took stimulus funding could be subject to at least 18 different conventional committees and different oversight. So, that’s sort of a challenge. And I would also highlight pharmaceutical companies. Pricing is a hot issue, and we’re seeing more for technology and social media companies with many, many dimensions and data privacy concerns. I don’t think those trends will go away any time soon. A macro discussion point we also see—this is a congress very interested, as is the Biden and Harris administration, in having client companies show diversity, equity and inclusion. So, one of the things we like to advise is, make sure you can have a good sense of what that story is if you are subject to any investigation, whatever the committee of jurisdiction. Not very many dull moments here, Joel!

Simon: Sounds like it! Now, once a company receives an indication that it’s a target or that it’s being investigated, is it too late at that point for them to implement any risk-reduction strategies? Or are there steps that they can take even after they find out that they’re the subject of an inquiry?

Moeller: On that, there’s good and bad news. The bad news: if you are investigated and you do receive a letter, it means that the committee has invested time and staff resources into tracking this matter. You’re catching up. What can you do about that? First things first, we like to be our client’s eyes and ears to find out as much as possible from behind the scenes. What could be driving the committee’s interest, and how can we best respond to that? That’s really where we like to come up with an attorney-client-privileged plan of response that helps meet their needs, though maybe not on the timeframe that they’ve asked for. Maybe we’ll need more time. That’s usually one of the first things we try to do, is understand how much time our client will need to respond and how to do that best. And then trying to look at it from a macro perspective. Where are their weaknesses? Where are their strengths? And that helps us be really effective because there is both an art and a science to this kind of negotiation. But, the goal, of course, is to make this go away. No one wants it to spiral into civil, criminal, DOJ, SEC. You have a trifecta setup under democrat control. Regulators and legislators around the world are activating on investigations, and you don’t want that to happen to you. So, if it does, you really want to take a very preventional approach.

Simon: So, what are some best practices that companies and general councils can implement here that you would recommend?

Moeller: Gather as much information as possible from people who know it. On the ground. That’s a really good “first things first.” And that’s what we like to do in a privileged manner because it will help you understand how to respond. And you do want to keep everything as privileged as possible. That’s the other point of view. Of course, you have to protect documents. But, as a GC recently told me, “We realize that we didn’t have a plan of response and now we have to make sure we have a privileged one.” It’s a crisis management moment, and it’s documenting things working with legal, often the communications team, internal and external, and other policy advisors to come up with a really good risk management plan. All of the above. And, as you know how important it is, to document it.

Simon: That’s great advice Elizabeth. Thank you so much for this discussion on congressional oversight and investigations. Once progress is made on infrastructure funding, I’d love for you to join us back here again.

Moeller: I would love to come back and join you for that. It’s always a pleasure.