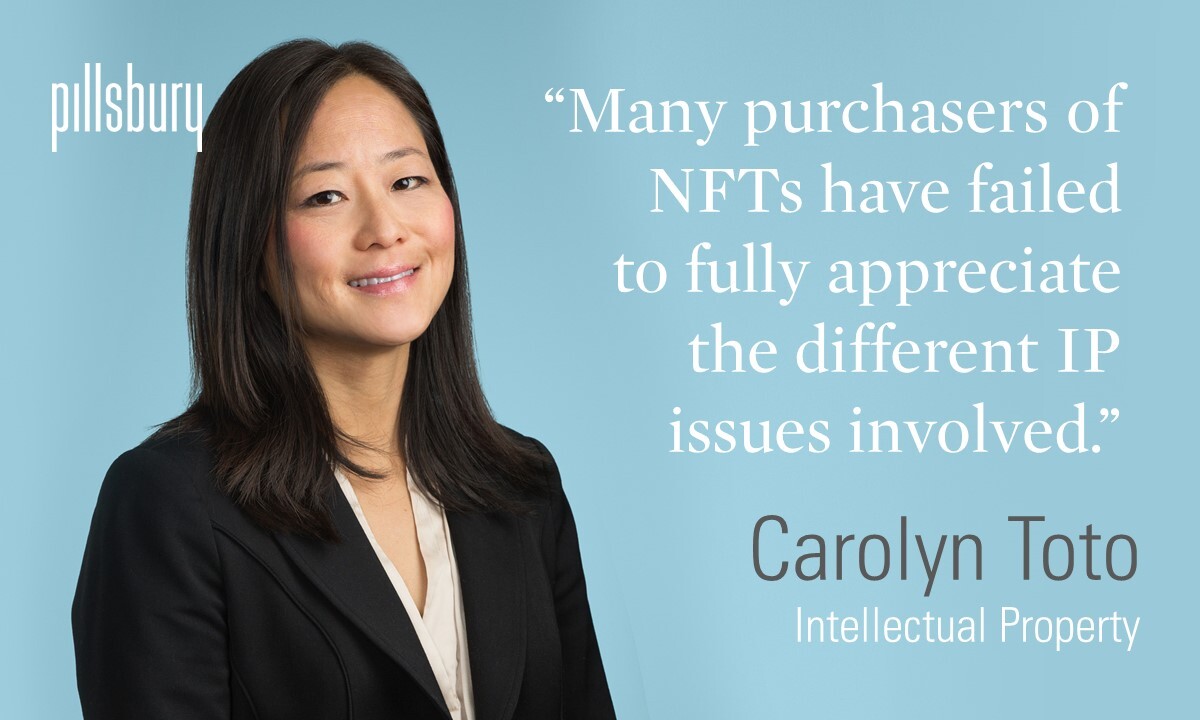 Carolyn Toto: Thanks, Joel, it’s great to be here today with you.

Joel Simon: Our discussion today is part of a series on non-fungible tokens, known as NFTs. We will take a look at some specific issues that are somewhat unique to NFTs, and try to give you, our listeners, some interesting things to watch out for as you wade into this relatively new space. Perhaps you can start us of, Carolyn, with a reminder of what an NFT actually is.

Toto: Of course. An NFT, or a non-fungible token, is generally described as a unit of data stored on a blockchain that represents a digital file. NFTs can represent real-world physical items, or as you’ve seen lately, digital items, like digital art. Like other cryptocurrencies, such as bitcoin or ether, an NFT is a cryptographic token that can be described as a measure of value that exists only on the blockchain. The difference here is that, unlike these other cryptocurrencies, NFTs are not mutually interchangeable. That is, they’re not fungible. So, one example is a bitcoin is indistinguishable from any other bitcoin, and can readily be exchanged one for another, but, by contrast, each NFT is unique. It’s a one-of-a-kind piece of code that’s stored and protected on the blockchain. So, as we’ve seen in recent months, the NFT has been used to represent digital files including art, music, videos, trading cards, recipes, and even real estate, and instead of having that physical, tangible item, an NFT representing ownership of that digital asset resides in a buyer’s digital wallet. So, a good analogy to the art world would be that instead of hanging on a wall, or sitting on a shelf, an NFT that represents digital art resides in a digital wallet, and currently there are very few restrictions as to what kind of content can be tokenized and turned into an NFT, so it presents a very interesting opportunity.

Simon: With the large sums of money involved in many NFT transactions, due diligence and proper transaction execution must be critical factors, yet I’ve heard about buyers getting tripped up on things that, once you hear about them, seem obvious. Can you shed some light on this for us?

Toto: As an IP attorney, I’m obviously always on the lookout for IP issues, and as with any other asset, an NFT can certainly involve IP issues if the buyer is not clear on exactly what he or she is buying. A problem to be aware of in terms of NFTs is that the person who mints or creates the NFT in the blockchain may not necessarily own the underlying digital content or the tangible or intangible item that the digital content is based on. For example, someone might take a photo and make an NFT of that digital image, but say the photo was actually taken by someone else, and the person who minted the NFT lacked authorization or ownership of that underlying photo. Then, technically the NFT could be infringing upon the IP rights of the photographer. One of the more current incidents that highlights this point is a lawsuit that Jay-Z filed against his cofounder Damon Dash of Roc-A-Fella Records, Jay-Z’s record label. The complaint alleges that Dash partnered with NFT platform SuperFarm to auction an NFT of Jay-Z’s 1996 debut album Reasonable Doubt, and it quotes a purported SuperFarm press release calling the sale one of the most significant NFT auctions to date because it would transfer the rights to all future revenue generated by the album from Damon Dash to the auction winner. That’s very unusual, because for the most part, NFTs generally retain the IP rights of the artists, and the creator will actually retain most of the copyright, but out of the bundle of rights, the NFT purchaser usually gets some limited license to display the NFT. And so, of course, the lawsuit starts that Dash didn’t actually have the IP rights to convey that broad transfer of IP rights in the NFT. The complaint alleges that Dash only owns a minority share in the record label, and as such he does not have the right to sell company assets outright. Ultimately, the auction was cancelled at Roc-A-Fella’s request, and the case is still pending, but it’s a prime example of why when somebody buys an NFT, they need to do their due diligence to ensure that the NFT creator has an aligned right to whatever digital asset it is that the NFT is based upon.

Of course, this is all developing since NFTs are still relatively new, but like purchases of tangible art, generally it is not a transfer of IP rights. The buyer gets the unlimited right to display the piece of art, but doesn’t necessarily have all the full copyright to the art. So, they may lack specific access to control that asset as if you had gotten entire ownership rights of that underlying asset. That’s one thing that many purchasers of NFTs, caught up in this fun development, have failed to fully appreciate—the different scopes of the IP issues. They need to make sure that they do their due diligence on IP rights.

Simon: It's really interesting how there can be such great advances in technology, and then there's this shift that goes on in the market and in people's minds, but then there are all these old rules and concepts from analog days that still apply in the digital world.

The second thing I'd like to hear you speak about is the platforms that hold these digital assets. Some of the issues seem obvious, but a buyer can be caught off guard due to lack of experience with NFTs. What are the risks to the owner of an NFT, for example, if the platform holding the NFT shuts down or if the platform operator goes into bankruptcy?

Toto: I think it would be useful to first get into a little background on blockchain technology before I answer that. Blockchain technology can be generally described as an open distributed ledger that records transactions between two parties in a verifiable and permanent way. And there's different types of blockchains with their own cryptographic tokens. So, for example, a bitcoin is the native token for Bitcoin. The platform here and the cryptocurrency have the same name. On the other hand, ether is the native token of etherium. And there are differences among these blockchains. Bitcoin is a single-purpose blockchain that's only used to transfer value, but there are more advanced ones like etherium which are considered multipurpose blockchains that can transfer value, but they also do other things such as support NFTs. And so today we see a lot of the NFT action happening on etherium, and most of the world-known NFT exchanges are maintaining NFTs using etherium.

Turning to the accessibility issue, most NFTs on blockchain are really just based on a URL that directs you to the site that’s hosting the underlying digital client content that the NFT represents, and these links need be maintained by someone just like any website. But there may be issues where a host or exchange shuts down or goes under for some reason, like bankruptcy, and if that happens, and nobody is maintaining the link, it essentially breaks and the NFT ends up pointing to a missing file. That's another underappreciated issue. Right now, one of the potential solutions that buyers of NFTs and NFT exchanges have been looking toward is to create NFTs using a decentralized system called IPFS or interplanetary file system. IPFS uses a peer-to-peer protocol so that the content is accessible through peers located anywhere in the world, not just on one site. Thus, an NFT that's linked to an IPFS address will let you find a piece of content so long as someone somewhere on that system is hosting the link, meaning you’ll have a lot more chances that that link will be maintained for longevity, as a multitude of hosts ensure the file remains online and accessible. Buyers who are looking to get into NFTs should, again, do their due diligence and know what type of hosting the NFT has. If you're going to buy from certain NFT exchanges, both sellers and buyers should be aware of that issue and take care to use platforms that are using either IPFS or something similar to that type of system.

Simon: That sounds like a great solution, and hopefully as that evolves it'll work the way people think it should. It also strikes me that this might be an area where there could be an insurance product or something like an insurance product to try to protect against platform risk like the type that you've discussed.

Toto: Insurers and insured tax provides some digital asset coverage. Currently these products usually apply to fungible tokens such as cryptocurrency and not NFTs per se. Today, I've seen a few insurers that say they specifically cover NFTs, but I think there's a lot more to be wanted. Our colleagues have actually written about this very issue. They note that the insurance industry has been slow to respond regarding NFT risks, but that's most likely because, like everyone else, it's coming to grips with the unique risks involved with NFTs, including some of the issues we just discussed. And, of course, the insurance industry is familiar with and does offer coverages to insure against many risks that are associated with NFT transactions, like IP protection, insurance against misrepresentation, theft and bankruptcy. I think the challenge here is for insurers to take some of the currently offered coverages that would be optimal to NFTs and just add specific insurance protection for those risks unique to NFT transactions to be able to create more NFT-specific policies. It will be interesting to watch how that develops.

Simon: We will definitely be on the lookout for further developments in the insurance area. It's been great having you on the podcast today, Carolyn. I'd love it if you could rejoin us for a followup to explore other NFT-related issues.

Toto: Thank you, Joel. It’s been my pleasure joining you today.