On April 10, 2018, SAP announced a new pricing model for licensing SAP software. This new pricing model is in response to an erosion of trust within SAP’s customer base precipitated by recent high-profile litigation brought by SAP seeking substantial additional license and support fees based on claims of indirect access to SAP ERP software. In developing the new pricing model, SAP sought input from user groups, customers, partners and industry analysts. SAP’s stated objective in the new pricing approach is to focus on business outcomes and provide an objective measure for the use of SAP ERP, SAP S/4HANA and SAP S/4HANA Cloud, which SAP refers to as the “Digital Core.” As discussed below, the new pricing model is a marked improvement, compared with SAP’s prior licensing regime, over the uncertainty and confusion surrounding indirect access, but leaves a number of questions unanswered for SAP customers.

SAP distinguishes between direct and indirect access to its Digital Core:

Examples of indirect access can be found in the Diageo case we reported on last year. Diageo developed and introduced two new software systems using a third party platform: (1) Gen2, which managed the operations of Diageo sales and service representatives; and (2) Connect, which enabled Diageo customers to manage their business accounts with Diageo. Gen2 and Connect interfaced and interacted with mySAP ERP. The use of those applications triggered exchanges of data generated by mySAP ERP, including updates and syncing of data between the systems. SAP successfully claimed that this indirect access to mySAP ERP required Diageo to purchase named user licenses for individuals using Gen2 and Connect.

Other indirect use examples include access via robotic process automation software (bots) and the Internet of Things (IoT), as well as by end consumers via e-commerce websites, all of which have become increasingly relevant as enterprises seek to become digital businesses.

The foundation of SAP’s existing pricing model for its Digital Core is a named user licensing/pricing model. That is, the customer “needs to hold a Named User License for any individual accessing any Package [i.e., software licensed from SAP] ...” (Section 1.2.1 of SAP Software Use Rights enGLOBAL.v.1-2018)

This model was designed for a time when users (primarily, the customer’s employees) accessed the Digital Core by directly logging into the system. However, as noted by SAP:

The technology landscape and how customers consume and use SAP software has undergone dramatic changes. Not only are our customers’ employees using the Digital Core (i.e., SAP ERP, SAP S/4HANA and SAP S/4HANA Cloud), their business partners, consumers, third-party applications, IoT devices, automated systems and RPA/bots are using the Digital Core.

SAP’s response to the changing landscape was to attempt to impose the named user licensing model on indirect use cases or, in some instances, use the threat of doing so to push sales of SAP HANA and SAP S/4HANA on customers. SAP claimed that indirect access falls within its definition of “Use” of SAP software, thus requiring a named user license for every individual who accesses SAP software indirectly through use of a non-SAP system. SAP’s published Software Use Rights (which is incorporated by reference in SAP’s current form on-premises license agreement) provides that:

However, applying SAP’s named user licensing framework across the board to indirect use cases is like the proverbial square peg in a round hole. SAP’s named user categories (e.g., SAP Professional User, SAP Developer User, SAP Employee User, etc.) were not designed or priced to reflect the various types of uses of SAP’s Digital Core that can be made through indirect access. This is why the Diageo court held that the users of Gen2 and Connect did not fall within any of the named user categories under Diageo’s license agreement and, therefore, left it to the quantum phase of the trial to determine the level of fees owed by Diageo by reference to the nature and extent of the usage and SAP’s price list.

Not surprisingly, many SAP customers have implemented proprietary or third-party systems that exchange data with SAP’s Digital Core (which serves as their system of record) without any awareness that there may be substantial hidden costs in the form of additional SAP named user license fees. In some cases, these systems may have been implemented with the support or at least awareness of SAP account or audit teams and without any notification to the customer of the licensing implications. The Diageo case and another high-profile lawsuit brought by SAP caught many customers off guard, leading to the backlash that precipitated SAP’s new pricing model.

Under the new model, direct human access to SAP’s Digital Core remains unchanged. The appropriate type of named user license is required for each individual who will have direct access to the Digital Core.

Indirect access also does not go away under the new model. As noted by industry analyst Den Howlett: “SAP still wants to be paid where it thinks it adds value.” (Den Howlett, “SAP Indirect Access new policies aid transparency, users remain uncertain”, diginomica, April 10, 2018) However, indirect access is priced under the new model based on document types rather than named users. SAP has identified a set of document types to serve as pricing metrics, two of which (Material and Financial) have a multiplier of 20% to reflect their lower value and more frequent use. SAP will count only the initial documents that are created, as measured over a 12-month period. Read, updates and deletion of documents do not incur an additional charge.

The table below sets forth the document types counted by SAP and an illustration of how they are counted. 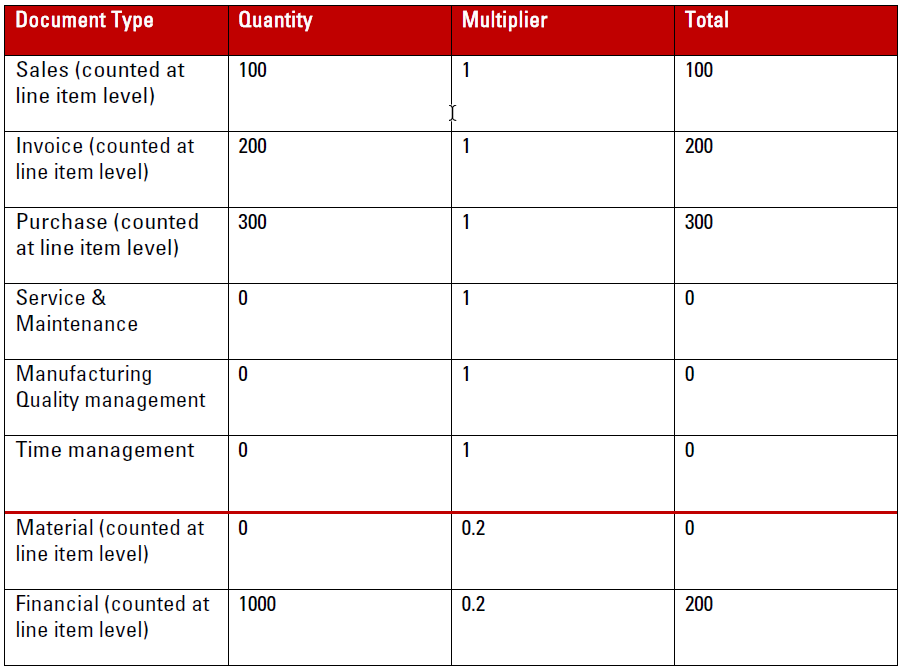 Customers will have to purchase an annual bundle based on an estimate of expected indirect use (i.e., how many thousands or millions of documents, counted at the line item level for a number of document types, they expect to create indirectly), with the final price dependent on the negotiation of volume and customer discounts.

Customers with existing licenses of SAP’s Digital Core are offered three options under the new model:

These options are depicted by SAP in the following diagram:

The implications of SAP’s new pricing model will vary depending on a company’s circumstances:

SAP is offering customers “who proactively engage with us in good faith that we will not pursue back maintenance for under-licensing of SAP Software associated with indirect access.” (SAP ERP Pricing for the Digital Age: Addressing Indirect/Digital Access, April 2018, page 6) SAP has also announced that license audits will be scheduled centrally and independently of the sales organization such that sales personnel can no longer initiate, conduct or cancel an audit, although the sale executive remains responsible for resolving compliance matters. As reported by Howlett, Gianmaria Perancin, chairman of the SAP User Group Executive Network (SUGEN), stated: “The split between audit and sales is very important because audit can no longer be used as leverage in negotiations. Anything arising in audit is not counted into the financial target of the sales people.”

These are positive signs for customers desiring to get the uncertainty over indirect access behind them. However, SAP has not reiterated a promise that Perancin stated was made by SAP to SUGEN in November 2017 that customers “would be able to adopt the new model without incurring further costs if the business value/scope of their usage of SAP stays the same.” In responding to SAP’s announcement of the new pricing model, SUGEN noted:

[T]here has been little progress in providing reassurances to existing long-standing customers on the neutral financial impact of the new licensing model, and to those who have until recently believed they were adequately licensed in relation to existing interfaces with third-party systems.

It is possible that SAP may seek to impose additional license and support fees prospectively for indirect access based on a customer’s current usage of SAP. There is, therefore, a risk to customers of incurring additional costs by engaging with SAP on indirect access, but also a risk that it could be more difficult to negotiate a favorable outcome later if it were to stonewall SAP on the issue.

The problem for many SAP customers is that they don’t know, categorically speaking, whether they are correctly licensed or not. Customers with potential indirect access issues would be well advised to develop a strategy before being approached by their SAP account team based on a review of their existing licenses and deployments of SAP software and an assessment of their potential financial exposure associated with existing and contemplated indirect use cases. Mitigating circumstances should also be considered, such as SAP’s role in implementing, or awareness of, indirect use cases without informing the customer of the licensing implications. Given SAP’s desire to rebuild trust with its customer base, circumstances that demonstrate the customer’s good faith could be an important consideration in persuading SAP to forego or minimize any requirement for purchasing additional licenses to cover existing deployments.