Riaz Karamali joins host Joel Simon to discuss the issues and innovations driving the video game industry, including the emergence of the metaverse and how non-fungible tokens, blockchain and Web 3.0 may underpin it. 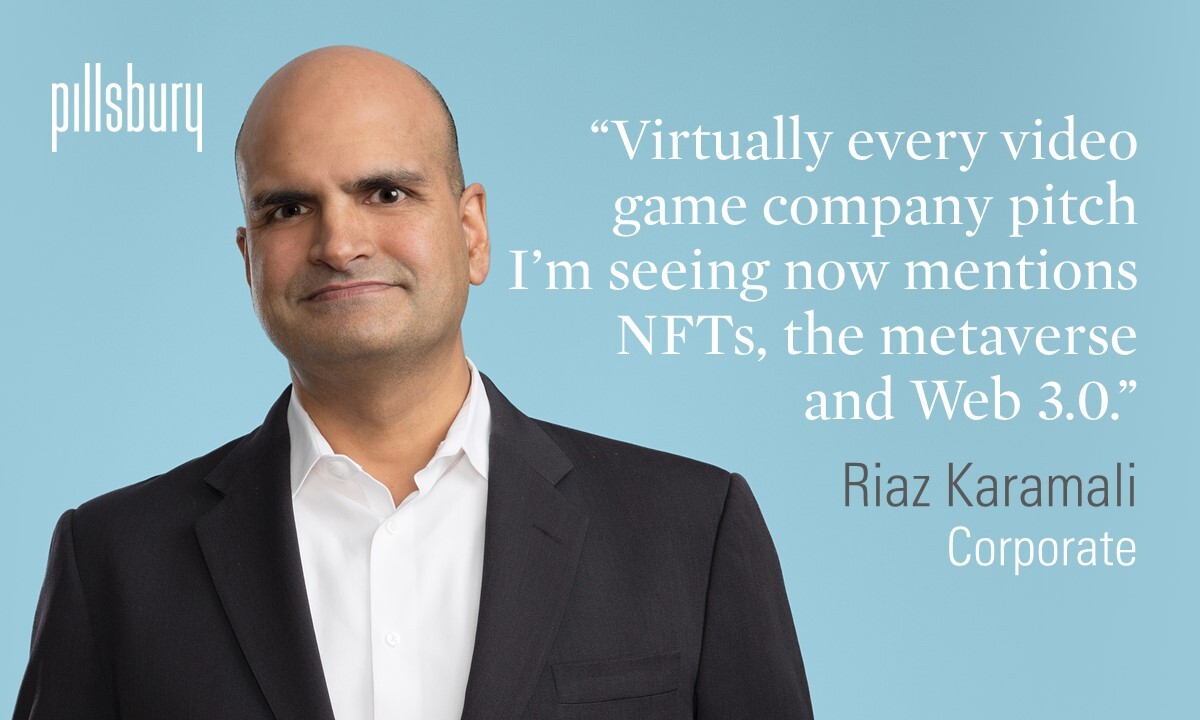 Hello, and welcome to Pillsbury’s Industry Insights podcast, where we discuss current legal and practical issues in finance and related sectors. I’m Joel Simon, a finance partner at the international law firm Pillsbury Winthrop Shaw Pittman. Our guest today is Riaz Karamali, a corporate partner in Pillsbury’s Silicon Valley office. Riaz is a valued strategic advisor and dealmaker who assists clients with negotiating and closing domestic and international venture finance, private equity, M&A and technology transactions. He has worked with hundreds of startups and emerging companies, guiding them from their pre-funding stages through their seed and venture capital financing rounds, significant commercial contracts and strategic alliances, to their ultimate exit transactions. Riaz also regularly represents investors in these types of companies. Welcome to our podcast, Riaz.

Joel Simon: Riaz, you’ve represented companies across a wide range of industries, including in the blockchain, crypto, video game, SAS, fintech, foodtech, biotech, semiconductor energy and medical device sectors, but today we’re going to focus on non-fungible tokens. Why are you so focused on NFTs right now, and is there a particular sector of companies that has caught your attention with NFTs?

Karamali: Well, Joel, I’m enormously privileged to have been living and working in Silicon Valley for the last 25 years, and we get to see world-changing technologies here before the rest of the world does. During that time, I’ve been able to work with and befriend some amazing entrepreneurs, so it’s really been a blast. And it’s kind of become my hobby to try to anticipate the future, to figure out where technology is going. Blockchain got on my radar probably almost 10 years ago, and I started to try to figure out how I could get involved in it, both professionally and personally. As a result, I’ve been representing investors and companies in the blockchain space, and I’ve been an angel investor in that space. NFTs is the latest twist that we’ve seen. Meanwhile, separately from the blockchain angle of my practice, I’ve been working with video game companies for the last dozen years or so and helping them in their financings and deals and M&A exits. This year, for the first time, these two worlds have really crashed together in the form of NFTs. That’s been exciting, and for the last six months or so I’ve been doing a lot of work for video game companies and helping them with NFTs.

Simon: I know that NFTs have been around since the mid-2010s, but since bursting into the public consciousness in a very big way in early 2021, the phenomenon has shown no signs of abating. NFT sales grew to over $10 billion in the third quarter alone. How has the popularity of NFTs affected the video game industry?

Karamali: It’s been transformational. CryptoKitties, one of the first NFT games, has actually been around since 2017. In it, people can breed their own, unique kitties and trade them. That is one concept that has taken off in different ways. The latest game that’s really doing well out there is called Axie Infinity, where people kind of breed these creatures—they’re basically monsters—which battle each other. It’s called the Pay to Play to Earn concept. There are folks who’ve basically left their jobs and are making their money from playing Axie Infinity. But pretty much any video game can incorporate NFTs. The neat thing about NFTs is that they can have an existence outside of the game, so even if the game is discontinued the NFT could still have some value or could be used in another game.

Another thing that people are doing is they’re pre-selling NFTs, which would become a component of the game, but before the game is even launched—they’re using these NFT presales to fund the development of the game, and because of the smart contract that underlies each NFT, when the NFTs are sold on the secondary market, then the game company keeps a percentage of each sale. This creates a revenue stream for the game company, where otherwise, in the pre-NFT days, they wouldn’t have had one. All of this has just created a lot of interest in the video game sector from investors. Traditionally, it’s been relatively difficult for video game companies to attract VC investment or even professional super angel investment, but with the potential that NFTs are showing, that’s changed. I’m getting clients that are getting funded at significantly higher valuations than they thought they would have, and companies that are getting funded much earlier than they normally would have been. So just in terms of the my traditional practice of venture finance, that is also booming in this area. Virtually every video game company pitch I’m seeing now is mentioning NFTs, is mentioning the metaverse and Web 3.0.

Simon: You mention the metaverse, Riaz, and by now most of us have heard it in a slightly different context, but can you spend a little time explaining what exactly the metaverse is, as well as elaborating on Web 3.0 and how it differs from its predecessor?

Karamali: Sure. The term “metaverse” was coined in 1992’s Snow Crash. I think of it as the anticipated universe of virtual worlds that are all interconnected. NFTs make it easy to have persistent characters and objects that can go from world to world. If you have an avatar, for example, that’s a game character, and if it’s an NFT, then you could take that avatar into different games, into different virtual worlds, and it would carry the attributes of whatever the strength or stamina associated with the object, like weapons, for example, with it. Right now, the metaverses that exist are basically within certain companies or specific worlds. Roblox is one example, but there are many different mini-metaverses that lack much in the way of interoperability across them. But that’s sort of the promise that people are hoping for.

Karamali: In terms of Web 3.0, it might be useful to talk about what Web 1.0 and what Web 2.0 are. Web 1.0 was just sort of the original kind of flat website on the internet, and Web 2.0 would be the internet as it exists now, with a lot of user participation. We have all these different social media sites, but there’s a lot of interactivity and participation, but they’re mediated through platforms that are usually owned by these large tech companies. They’re free to use, but obviously the company profits greatly. There might be some monetization possibilities, and there are monetization possibilities for individuals, but it’s limited compared to the profits the company is getting on advertising and from other ways that they’re mining the data. Web 3.0 is the decentralized future, where decentralized data lives across the different nodes on the blockchain. It would be very difficult to shut down or censor, it would be encrypted, and it would be easily monetized by the creators with open standards. People talk about the creator economy—this would really be a way for creators to be more connected to their fans and the users, and also for the users to be creators, and so it’s almost a utopian thing, the way some people talk about it. We’ll see how it develops.

Simon: Well, it sounds like in this future paradigm, video game companies will probably need to pivot into NFT entertainment companies. How easy or not will that be for them?

Karamali: That’s a good question. In some ways, it’s easier for new, well-capitalized companies than for some of the entrenched legacy players. One of the things that a company has to decide when it’s going to go down this path is to choose what’s called the layer-one protocol to build on. Ethereum, for example, is a layer-one protocol. It’s the oldest and largest, and people can build smart contracts on Ethereum which would basically be the NFTs. But Ethereum has its concerns—mostly speed and expense. There’s something called gas fees for every transaction that gets taken out. Cellana and Flow are the big competitors to Ethereum, and there are quite a few others. So that’s sort of the first decision is what protocol to build on. Then, when the company kind of builds out its own NFT world, that’s considered a layer-two protocol. We’re seeing a lot of activity in the space, and it’s going to be interesting.

Simon: Well, it sounds like there’s a lot of commercial possibilities and a lot of excitement around the technology and the customer experience. I also imagine as a lawyer that you see a plethora of legal issues and challenges, as well?

Karamali: Yeah, that’s for sure. That’s been one of the the really fascinating things about being in this space, and it’s beyond know what I as an individual can handle. And that’s one of the great things with all the resources that we have at Pillsbury. For example, there are securities issues. Right off the bat. The securities and commodities issues, the way some of the things are being marketed and sold, and you have to counsel your clients about that. But there are a lot of question marks, you know, because the regulators haven’t really spoken very well in that space. Then there are IP issues in terms of, it’s very easy to grab something from the Internet and turn it into an NFT, but do you really have the right to do that? And we’ve got some great copyright lawyers who I go to to make sure that my clients are doing the right thing there. Then there are KYC, which stands for Know Your Customer and AML (anti-money laundering) issues. One of the issues in this space is because people buy NFTs with cryptocurrency, you can’t be sure it’s not coming from a banking system, necessarily. You can’t be sure where that cryptocurrency originated and if it’s coming from a country that we shouldn’t be doing business with under U.S. law, or if it’s coming from the proceeds of ill-gotten gains and, you know, anecdotally folks think that there’s a lot of money laundering going on in the space. So since we represent clients that always want to do the right thing, we need to figure out how to advise them and about the risks in the space from that perspective. Some NFT projects have gambling elements, and so we have to look at that perspective, and some projects have sort of money transmission and banking elements. So all of those different areas of the law are implicated.

Simon: It sounds like you have your hands full in a lot of ways here, Riaz. This has been a fascinating and enlightening discussion, and thanks so much for joining us today.

Karamali: Thanks so much, Joel. It’s been great to be here with you today.

You can listen to Industry Insights on your favorite streaming services, including Spotify, Google Podcasts, Apple Podcasts, Amazon Music and Audible, or on our website. Until next time, thank you for listening.