As a result of the increase in the U.S. Gross National Product (GNP) for 2021, after the first decrease in U.S. GNP in over a decade in 2020, the Federal Trade Commission (FTC) has announced higher revised thresholds for the Hart-Scott-Rodino Antitrust Improvements Act of 1976 (HSR), which will become effective on February 23, 2022. Since the FTC began adjusting the thresholds in 2005, the 2022 threshold increase is the largest year-over-year increase, both in terms of dollar value and percentage increase. The thresholds determine whether parties involved in proposed mergers, consolidations, or other acquisitions of voting securities, assets, or unincorporated interests must notify the FTC and the Antitrust Division of the Department of Justice (DOJ) of a proposed transaction and comply with a mandatory waiting period before the transaction may be consummated. Note that the current $92 million threshold is still in effect for transactions that will close on or before February 22, 2022.

HSR Thresholds Increase. Generally, a transaction will not be reportable under the new thresholds unless it is valued for HSR purposes at more than $101 million. If the value of the proposed transaction is greater than $101 million but not greater than $403.9 million, the transaction will not be reportable unless the “ultimate parents” of the acquiring and the acquired entities also meet a certain minimum “size-of-person” test—in most instances, where one ultimate parent (including all entities it controls) has net sales or total assets of at least $20.2 million and the other has net sales or total assets of at least $202 million. Where the jurisdictional tests are met, the transactions are reportable unless an exemption applies. The table below includes the original and the newly adjusted figures for each relevant HSR threshold (the original figure continues to appear in HSR regulations with the words “as adjusted” to remind the reader that the thresholds are adjusted each year). Parties should be mindful that there are many other factors that impact whether a given transaction is subject to the jurisdictional thresholds in addition to these dollar thresholds. 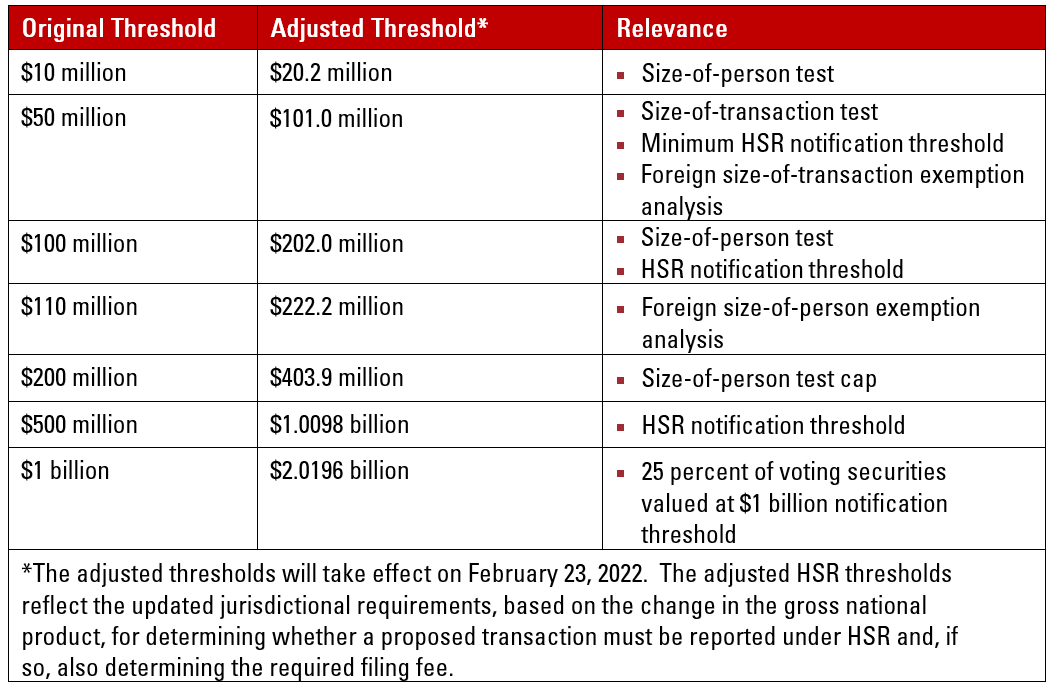 HSR Filing Fees. The filing fees for reportable transactions will be as follows:

Revised Thresholds for Interlocking Directorates. Section 8 of the Clayton Act generally prohibits companies that compete with each other from having interlocking memberships on their corporate boards of directors. The FTC annually revises the jurisdictional thresholds that trigger the interlocking directorate prohibition. The changes to the thresholds are based on the change in the gross national product and are effective as of January 24, 2022.

HSR Thresholds Will Decrease for 2021 Transactions

Size-of-transaction threshold under Hart-Scott-Rodino Act will decrease to $92 million; the first threshold decrease since 2010.