Volatility in the uranium market must be carefully evaluated to fully understand the risks of potential investment.

Short-term financial disruption may be a leading indicator for future growth, but the history of uranium pricing has a track record of large periodic pricing swings.
The growth of nuclear power in numerous markets, the near-term demonstration of advanced reactor technologies and the potential for nuclear hydrogen production may be indicators of a longer-term pivot toward increased investment in the uranium sector.

Observers have been watching the volatility in the spot price of uranium1 over the last several weeks (ranging from approximately $30.50/lb. in mid-August 2021 to approximately $50/lb. in mid-September and has subsequently fallen back to about $43/lb., underscoring the price volatility). While worldwide use of uranium has been fairly steady at around 165 – 175 million pounds per year, the need to address sustainable development and decarbonization goals, including the increased deployment of traditional large light water reactors globally and the near-term demonstration of innovative advanced reactor technologies in several markets has led to interest in evaluating opportunities in the uranium market. Investors considering these prospects should understand the history and nature of uranium markets and factors weighing on demand and price as part of their due diligence process.

Uranium prices have fluctuated considerably over the past 15 or so years. As the graph below shows, prices reached an all-time high in 2007, then fell significantly due, in part, to the appearance of alternative energy sources such as shale gas in the U.S. and a move toward subsidization of renewables. Uranium prices began to recover, until the Fukushima accident in March 2011, when four of the six reactors at the Fukushima Daiichi site were overcome by a tsunami that devastated the entire Fukushima region. The Fukushima event caused the eventual closing of all 54 of Japan’s then-operating reactors and all 17 of Germany’s then-operating reactors. While some nine Japanese plants have since been restarted and 17 are currently under review, the Fukushima event was a leading trigger for a long-term decline in uranium prices due to decreased demand. Indeed, the uranium price eventually reached a low point of approximately $18/lb in 2017.

The spot uranium price was once again making a slow comeback after 2017, following reductions in production by the uranium producers (in response to the market, U.S. trade issues, and the COVID-19 pandemic) and the construction of new reactors in Asia and the Middle East. The uranium spot price was hovering in the $27/lb. to $32/lb. range prior to last month’s price runup. 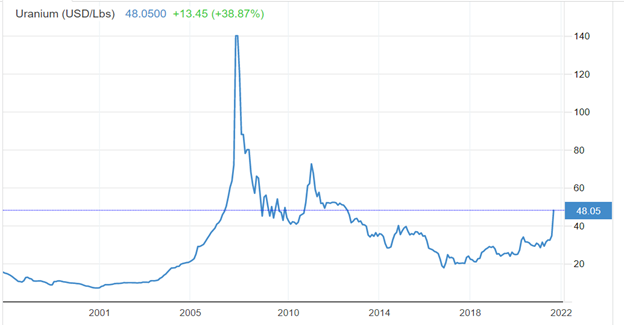 So, what has happened to the uranium spot market in the last month to cause such a dramatic price increase?

The Sprott Physical Uranium Trust (SPUT) began trading on the Toronto exchange in July 2021 and has purchased uranium nearly continuously on the spot market since then. The fund has accumulated over 28 million lbs. of U3O8 (about one-eighth of the total yearly world demand) and claims no intention of selling any of its holdings. The SPUT fund raises capital by issuing new shares and using the funds to purchase additional uranium. On September 17, the fund announced in a filing that it is increasing the amount available under its at-the-market (ATM) equity program by $1 billion to allow the uranium trust to raise up to $1.3 billion. Sprott will use these funds to continue purchasing physical uranium on the spot market. The 64 percent increase from mid-August to mid-September 2021 was largely the result of SPUT using its $300 million of ATM funds. It now potentially has over $1 billion to spend on physical uranium purchases. Two other funds have followed Sprott’s lead, and more may follow.

These “buy and hold” physical uranium investment funds have the potential to reshape not only the uranium spot market but the long-term uranium market as well. The question is whether the current activity of these funds will be a temporary phenomenon or if they will have a sustaining presence. As noted previously, there have been prior runups in uranium prices (such as in 2007, when a high of $137/lb. was reached in advance of the financial crisis), and that prices were on an uptick from the lows prior to Fukushima.

One key factor to consider is the increased role that nuclear energy is positioned to play in meeting increased energy demand, sustainable development goals and decarbonization requirements. Nuclear is growing in three of the five largest electricity markets in the world—China, India and Russia (with 28 GWe of nuclear under construction in those three countries), the UAE has successfully completed and brought into operation the first two of the four units of its mega 5.6 GWe Barakah project, and other nations like Turkey and Bangladesh are constructing their first new nuclear units. At the same time, North America is seeing significant government support and progress with the demonstration of advanced reactors with the potential for higher efficiencies, greater safety margins and more modular designs. Nuclear power also offers a pathway for the production of clean hydrogen and ammonia (potentially a multitrillion-dollar market) for use in hard-to-abate sectors like marine shipping. Given these developments, demand for uranium is poised to increase, regardless of the demand from the investment funds. The WNA 2021 Fuel Report estimates in their reference scenario that the world demand for uranium will increase by almost 80 percent from 2021 to 2040 (solely with reference to end-user demand).2

The question for potential market participants today is whether the current cycle is a leading indicator of a longer-term pivot towards increased investment in the uranium sector. We encourage interested parties to reach out to the authors or the Pillsbury Winthrop attorneys with whom you normally consult for a deeper discussion regarding the nuclear energy industry and potential opportunities.

Pillsbury’s nuclear and corporate attorneys are uniquely situated to provide one-stop legal services shopping for investors, developers and other potential players in this market. We have been the leading nuclear energy practice for over 50 years and have followed uranium and power production markets for decades. We regularly advise technology and project developers as well as lenders on complex transactions involving the construction, development, and financing of nuclear and conventional power plants. We also advise clients on a daily basis regarding how to interpret and comply with the extensive federal and state laws and regulations affecting the nuclear power industry, including those relating to international transactions, such as CFIUS and the Nuclear Regulatory Commission’s restrictions on foreign investment.

[1] For purposes of this article, “uranium” refers to the mined and milled version of triuranium octoxide or U3O8.