The State of Play on Clawbacks and Forfeitures Based on Misconduct

Clawback policies have been common for some time. However, because implementation of the proposed Dodd-Frank clawback rules may never be finalized, companies are beginning to implement or update executive compensation recoupment and forfeiture rules on their own based on investor sentiment, good governance principles, and recent events at CBS (and other #MeToo moments), Nissan, Equifax and other examples of supervisory failure.

Companies should determine whether clawbacks are mandatory or discretionary, whether fault is required in the case of financial restatements, and whether clawbacks should extend beyond financial restatements.
Companies should revisit whether the definition of “cause” used in forfeiture provisions in their severance and employment agreements and equity plans should cover reputational harm and adverse publicity to the employer.
Companies should consider implementing clawback policies to improve their ISS Equity Plan Scorecard scores if their stock plans are up for shareholder approval.

This article was also featured in the Harvard Law School Forum on Corporate Governance and Financial Regulation and in Insights, The Corporate & Securities Law Advisor.

On July 1, 2015, the SEC issued proposed rules implementing Section 954 of the Dodd-Frank Act, which would obligate national securities exchanges to adopt listing standards that require listed companies to adopt and disclose clawback policies to recover from current and former executive officers’ excess incentive-based compensation attained during the three fiscal years preceding the date on which the company is required to prepare a financial restatement to correct a material error. Unlike the mandatory clawback requirements enforced by the SEC under the Sarbanes-Oxley Act, to which public companies are already subject, under the proposed rules, no fault would be required for the clawback to apply, the clawback would apply to all current and former executive officers (instead of just the CEO and CFO), and enforcement of the clawback would fall on the issuer as opposed to the SEC.

However, the rules are only proposed, and there is uncertainty surrounding whether these rules will be finalized in light of the current political landscape. Given this uncertainty, companies are beginning to implement executive compensation recoupment and forfeiture rules on their own, based on investor sentiment, good governance principles, recent events at CBS (and other #MeToo moments), Nissan, Equifax and other examples of supervisory failure, and to improve their scores on the ISS Equity Plan Scorecard if the equity plan is being put up for shareholder approval. See ISS U.S. Equity Compensation Plans FAQ. ISS also awards full points to clawback policies which authorize recovery of gains from at least most equity awards in the event of a certain financial restatement. ISS defines “clawback” as a company’s ability to recoup performance-based awards (including any cash-based incentive awards, at a minimum) in the event of fraud, restatement of results, errors/omissions or other activities related to the above.

While many companies are adopting or modifying their existing clawback policies in a manner intended to meet the proposed Dodd-Frank clawback rules, some companies also go beyond these minimum requirements and include additional clawback triggers in their clawback policies and forfeiture provisions, such as detrimental behavior and violation of restrictive covenants.

Big investment funds (e.g., BlackRock and CalPERS) are increasingly encouraging companies to expand these clawback policies to provide discretion covering management misconduct that results in significant reputational harm or adverse publicity unrelated to a financial restatement and executives who supervise employees who engaged in misconduct.

Practice Note: It remains to be seen the extent to which clawbacks of already paid cash or stock are enforceable, particularly in California, which has a strong public policy favoring the protection of employees’ wages. In this respect, California Labor Code section 221 states that employers may not collect or receive any part of wages previously paid by the employer to an employee. California takes an expansive view of the term “wages”, which includes all amounts for labor performed by employees of every description, including bonuses and incentive compensation, but not stock options. To enhance enforceability, clawback provisions should be placed prominently in award agreements that participants acknowledge and sign.

To manage the risk of non-enforceability of clawbacks, these companies also have policies allowing for forfeiture of unearned, unvested or unexercised outstanding cash and equity incentives if an executive is terminated for “cause” or violates post-employment restrictive covenants. In states where forfeiture of earned amounts is generally disfavored (e.g., California), companies should make clear in the award documentation that the compensation is intended as an incentive for future services, and not a reward for past services. See Forfeiture Policy Comparison below.

Practice Note: Enforcement of forfeiture provisions tied to violations of restrictive covenants may still be problematic in states that generally disfavor or do not enforce restrictive covenants (e.g., California, where a court would be unlikely to enforce a clawback based on an unenforceable non-compete).

In response to these guidelines, companies are broadly reviewing their policies in the context of market direction, shareholder sentiment, and the need to balance flexibility to exercise discretion with enforcement issues and the negative perception of program participants that there are “strings attached.”

A review of ten major Silicon Valley companies reveals that the Dodd-Frank proposed rule is pushing additional clawback provisions. However, uptake of additional requirements on top of the proposed rule appears to be slow, likely due in part to enforcement issues in California.

Recoupment. In the event that the Company is required to prepare restated financial results owing to an executive officer’s intentional misconduct or grossly negligent conduct, the Board of Directors (or a designated committee) shall have the authority, to the extent permitted by applicable law (including California law), to require reimbursement or forfeiture to the Company of the amount of bonus or incentive compensation (whether cash-based or equity-based) such executive officer received during the three fiscal years preceding the year the restatement is determined to be required, to the extent that such bonus or incentive compensation exceeds what the officer would have received based on an applicable restated performance measure or target. The Company will recoup incentive-based compensation from executive officers to the extent required under the Dodd-Frank Wall Street Reform and Consumer Protection Act and any rules, regulations and listing standards that may be issued under that act. Any right of recoupment under this policy will be in addition to, and not in lieu of, any other rights of recoupment that may be available to the Company.

The forfeiture provisions enacted by the same ten Silicon Valley companies suggest that market norms and public perception are a governing factor when setting forfeiture policy. In light of recent events, we expect that companies will increasingly provide for forfeiture on account of reputational harm in connection with a “for-cause” termination for fraud or misconduct. 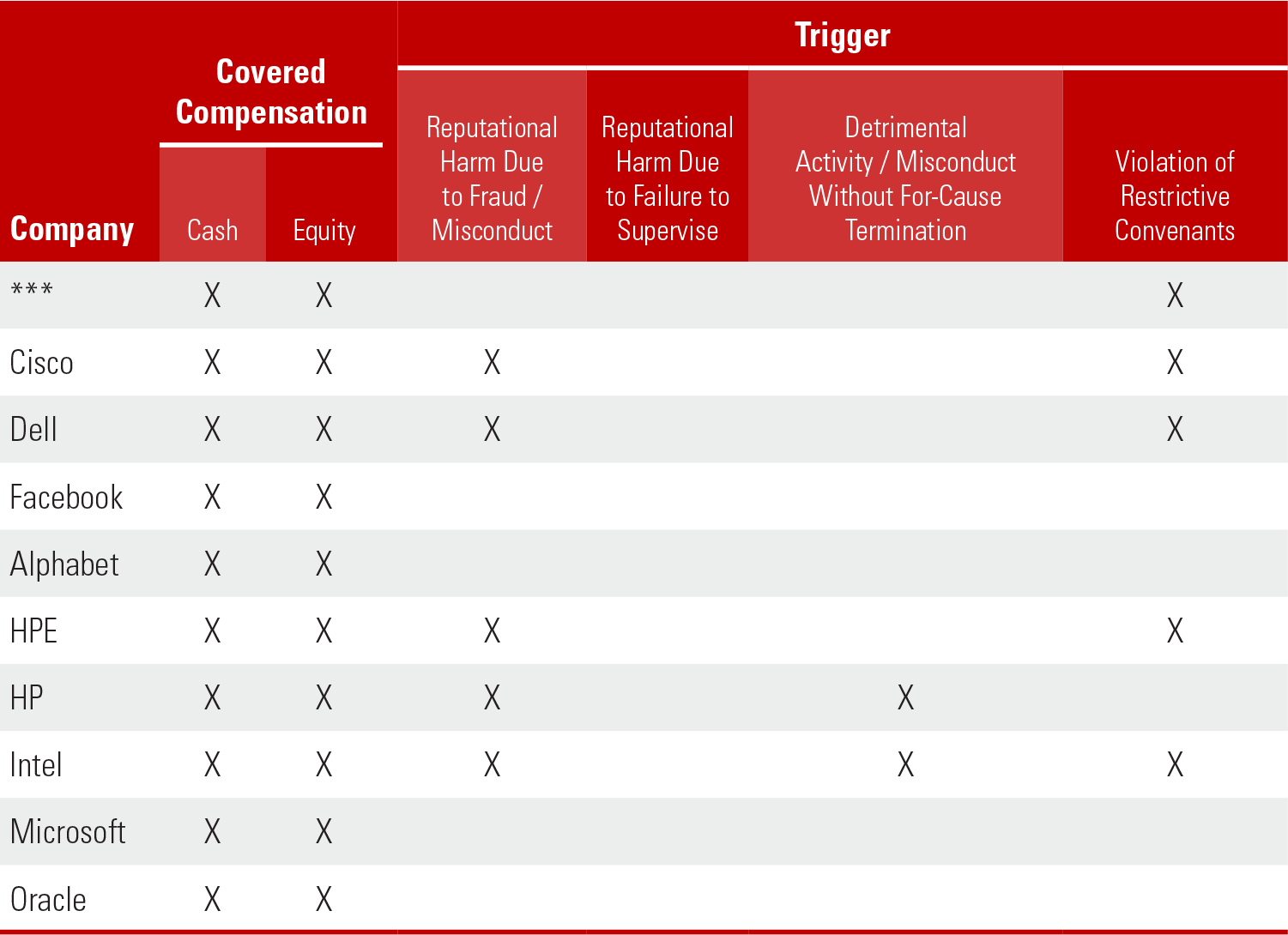 Until the proposed Dodd-Frank rules are finalized, companies should adopt clawback policies that, in the event of a financial restatement, give them the discretion to select the executives from which to clawback and whether to recoup cash and equity incentives that were in excess of what should have been paid or earned based on the financial restatement. Based on enforcement issues, companies may not want to expand clawbacks beyond financial restatements or fraud. Companies should also review their executive employment agreements, severance policies, equity award agreements and cash incentive plans to make sure they have the ability to forfeit unpaid cash bonuses or severance and unvested and/or unexercised equity incentives in the event a CEO or other high-profile executive engages in misconduct whether or not it results in reputational harm or adverse publicity to the Company.